The Real Dirt on Potting Soil:

How to Pick the Right Mix for Your Plant

Confused about potting soil? You're not alone. Garden centers carry a variety of packaged mixes for house plants to choose from...and the type you need depends on your plant.

Although potting media is often referred to as potting soil -- I use that word myself -- many commercial potting mixes contain little or no soil at all. Why? Soil can become compact in a container robbing the plant's roots of the oxygen they need.

Don't even think about using garden soil for your house plants!

Resist the temptation to dig up dirt from your garden and put it in a pot. Garden soil is a triple threat: it becomes too compact in a container, it could contain weed seeds, and there may be insects hiding in the soil. You don't want to start off your plant with these problems.

House plants have their own preferences for acidity and alkalinity of soil.

Disclosure: Guide-to-Houseplants.com participates in affiliate programs from garden companies. If you make a purchase after following the above links, I may receive a commission. 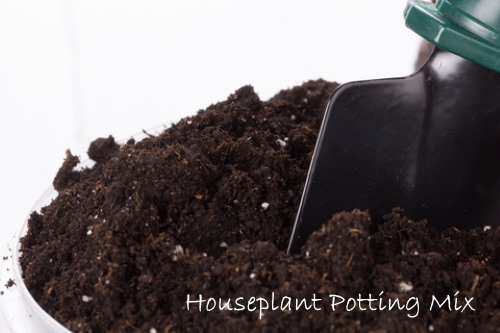 Give your houseplant a good start with the right mix. Photo © Nolan777

Ready-to-use potting mixes are often soilless. They are peat moss based or composed of some other partially decomposed plant material, such as ground fir bark. Vermiculite, perlite and sand can be added to the mix to allow more air into the soil and speed up drainage. 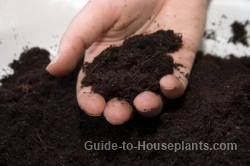 Before you buy a bag at the nursery or garden center, take a look at its contents. Here's a list of common potting mix ingredients and what they do:

Peat moss is the basic ingredient in most of today's commercial potting mixes. Made up of partially decomposed bog plants, it is ground into a coarse brown powder. Peat moss adds lightness to a mix and improves water retention. Plants that like moist potting soil, such as African violets, ferns and begonias, thrive in a peat moss-based mix because of its excellent ability to hold moisture.

Bark When you run your fingers through potting medium, you'll probably notice chunks of tree bark or bits of twigs. These coarse pieces help drainage and also prevent the medium from becoming compact, allowing air circulation around the plant's roots. Composted bark is commonly used in mixes for bromeliads and orchids.

Sand is often added to potting mixes to speed up drainage. Because coarse sand cannot hold moisture well, a sandy mix will dry out quickly, which is ideal for cacti and other succulents that prefer water in small gulps. Palms that are native to sandy seashores also grow well in a sandy potting mixture. Use only horticultural or washed sand that is free from salt and other impurities.

Vermiculite is made from natural mineral deposits and look like little flakes of gold. Besides helping to maintain aeration in a mix, vermiculite can absorb several times its weight in water and minerals, and release them slowly.

Perlite looks like small, white puffs. It's actually pieces of expanded volcanic rock with thousands of tiny air pockets that allow for perlite to take up and release water quickly. Besides regulating water in the medium, it helps improve drainage. Many potting mixes contain perlite, and those formulated for succulents often contain an extra helping.

Charcoal is used as a layer under the soil in terrariums and bottle gardens. Because these types of plantings won't get repotted, and the containers hold in moisture, the soil can get sour over time. Charcoal absorbs odors and keeps the soil fresh. This is horticultural charcoal, not the barbecue kind. Unless you're creating an enclosed planting such as this, you won't need it.

You'll find packaged potting soil mixes in 2, 5, 10 and 20 quart bags at the nursery or garden center. A 2-quart bag is enough to plant 3 or 4 small plants.

Before buying, squeeze the bag to test the quality of the potting soil mix. It should feel soft, pliable and lightly moist. Pass up any that are dry, caked, or looks gray instead of black -- signs that it's old and probably lacking in nutrients. Unfortunately, even the best mixes only last a couple of years before the organic matter breaks down.