This unusual succulent is often overlooked as a houseplant, but I think it's growing in popularity. It not only makes an eye-catching room accent, care for this plant is super-easy.

Set your plant in a semi-sunny location and leave it there. Its thick, succulent leaves retain water, so it rarely needs watering. 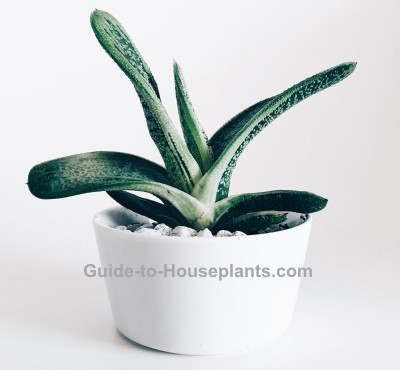 Get to Know Gasterias

Gasteria sp. are in the Lily family, along with Haworthias and Aloes. Most share a similar growth habit, growing into a stemless rosette of leaves.

Leaves are thick, with rounded ends, and may have an upright growth habit, arching outward in a rosette, or fan shaped. Some varieties have a smooth surface and many have a pebbly texture. You can see from the picture here where it gets the common name, Ox Tongue.

Colors vary from dark green to lighter green, depending on the variety. Some are spotted with light shades of green or gray-green. Gasteria bicolor features thick, flat leaves with striped patterns.

Mature plants may send up flower spikes covered with small, bulbous blooms. Those flowers are stomach-shaped, rounded in the middle and tapered on one end. Its resemblance to a stomach is where this plant gets its genus name, Gasteria.

Black spot is a fungus that may be caused by overwatering. You'll recognize it as large, black indentations surrounded by yellow halos. Fungus won't kill your plant, but you'll want to treat it with a fungicide specially made for black spot.

White fuzzy specks, called mealybugs sometimes attack succulent plants. It's a good idea to look over houseplants for pests once in a while. Treat any infestation immediately to prevent bugs from moving on to your other indoor plants.

Light: Bright light, with some direct sun in winter.

Water: Keep soil barely moist spring through fall, slightly drier in winter. Do not allow the potting medium to dry out completely. Water the potting medium, not the plant. Avoid getting water on its leaves, which can cause them to rot.

Fertilizer: Spring through fall, feed monthly with a 2-7-7 succulent plant fertilizer, diluted by half. Gasteria sp. are slow-growing and won't need much plant food.

Propagation: Divide offsets in spring or early summer. Ease the plants out of the pot, then gently pull the offset plants away. Gasterias have small roots, making them easy to separate. Pot them in barely moist sandy potting mix.