How to Prevent Damping Off Fungus

Seedlings that wilt and die are usually afflicted by damping off -- a disease caused by a fungus. Unfortunately, young seedlings are especially susceptible to fungus. Worse yet, fungi spreads quickly, wiping out entire trays of seedlings.

Best Ways to Prevent Damping Off

Use sterile potting mix. You'll find mixes specially made for seed starting that are soilless. These soilless mixes are sterile -- and your best bet for avoiding any fungus problems.

Never re-use potting mixes. It's just not worth it. And don't even think about digging up dirt from your garden to start seeds indoors. Garden soil is a triple threat: it becomes too compact in a container -- it's also filled with live bacteria, and possibly insects. You don't want to start off your seedlings with these problems.

Use clean containers. If you re-use trays or other containers for starting seeds, wash them thoroughly with soap and water, then allow to dry completely before planting in them. Containers for seed starting need to be clean to prevent contaminating the potting medium.

Avoid overwatering. Fungus thrives in a moist environment. Overwatering seedlings promotes damping off fungus. It's a good idea to water seedlings from below so that the surface of the potting medium doesn't become soggy. Most seed starting trays have drainage holes to allow the potting medium to soak up water from below. Peat pots, which are made up of compressed peat moss, will also soak up water.

An easy, no-fail way to water seedlings is with a capillary mat.

is a highly absorbent fabric that soaks up water like a sponge. Get it soaking wet, stretch it out, then press seed trays or pots firmly down on the mat. That's it. Capillary matting does your watering for you. The soil will absorb as much water as it needs -- no more, no less. You won't overwater or underwater your seedlings.

Water the mat once in a while so that it doesn't dry out. Or dip one end of the mat into a reservoir of water and it will wick up water as needed.

Give seedlings air. Good air circulation helps to dry the surface of the potting medium. Use a fan, if needed, to increase air flow over your seedling trays.

How do you know if your seedlings have damping off disease?

If you find seedlings that are wilted and fallen over -- with green leaves, but the stems are blackened and shriveled at the soil level, they have fallen victim to damping off. 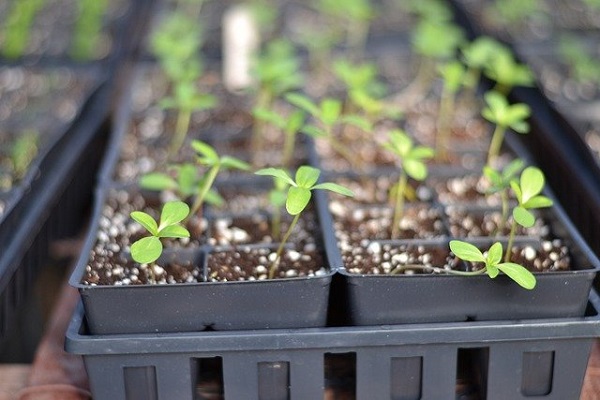 Damping off is a fungal disease that can strike seedlings and quickly kill them. If not detected right away, it will spread and can wipe out every seedling in a tray within hours.

Too much moisture and a lack of ventilation promote this dreaded disease.

What to Do if Your Seedlings Show Signs of Damping Off

If you find even one of your seedlings lying on the soil, pull it out. Just as a precaution, remove the surrounding seedlings at once.

Is the soil too moist? Do what you can to increase air circulation around the seedlings. Move the tray away from other plants to avoid contaminating them and to help air flow. Use a fan on the seedlings to help dry the soil. If the soil surface is soggy, try gently blotting it with paper towels to wick up the excess moisture.

Once the soil has dried out a bit, you can return the tray back to its former location. Water only when the soil is dry, aiming to keep it only lightly moist. Always water seedlings from the bottom -- and don't leave containers to sit in water any longer than it takes to moisten the soil surface.