Cape Sundew makes an eye-catching -- as well as bug-catching -- house plant for those looking for a fascinating plant to play with. 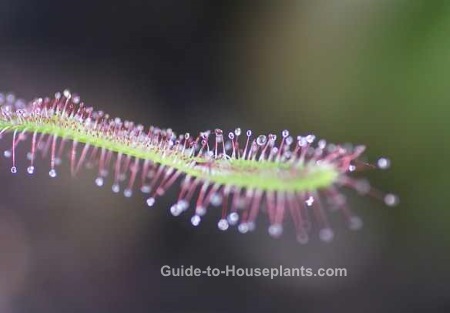 This carnivorous plant grows in a rosette. Its long, narrow leaves are covered with bright red hairs -- or tentacles -- which secrete a sticky juice, luring flies and other insects.

Fooled into mistaking that glistening liquid for nectar, bugs are attracted to them. As soon as a bug lands, it's stuck and the leaf folds up to hold the insect. Sundew produces a digestive enzyme that breaks down protein from the insect so that it can be absorbed by the plant.

Sundews produce seeds generously, and will even spread them around. Seed pods burst open, dropping seeds into the pot -- or any pot nearby where they readily germinate.

You'll get dozens of blooms from healthy, mature plants in early summer. (Plants reach maturity in about a year.) Each flower stem carries several buds that open in succession, from bottom to top. The small, pink flowers are attractive, though short-lived...each one lasting only a day.

Wait for flowers to dry and you can collect their seeds -- they're viable and ready to sow for more Sundews (see "Propagation" below). 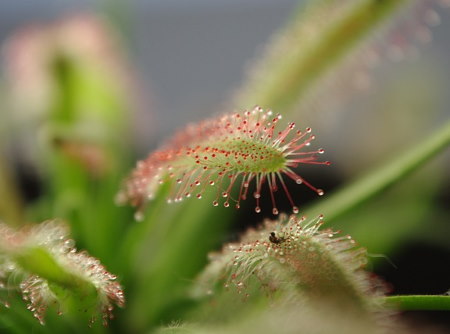 Feed me? Sundews need to eat to survive and grow. They get all their nourishment from the insects they capture. Since your carnivorous plant is unlikely to catch flies or other insects in the house, you'll want to feed it. (Isn't that the fun of having this plant, anyway?)

Native to a subtropical climate, Cape Sundew prefers higher humidity than most homes provide. It's a good candidate for a terrarium or Wardian case, which will help to maintain humidity.

This perennial won't go dormant in winter as long as its culture stays the same. However, lower light levels and cooler temperatures can cause this carnivore to go dormant. If this happens, don't give up on it. It'll grow new leaves and flowers when it gets what it wants. 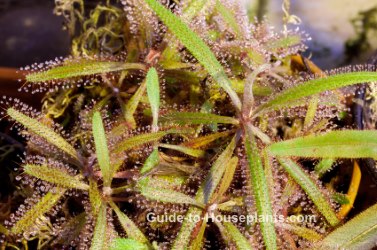 Humidity: Moderate to high. If the relative humidity drops below 50%, you'll want to raise the humidity for your plant.

Temperature: Average room temperatures 60-75°F/16-24°C. It will tolerate a wider range. Cold air may cause dormancy, so it's best to maintain normal room temps for it year-round.

Fertilizer: Don't fertilize because it will burn the roots and may kill the plant. Since sundews are unlikely to catch insects in the house, you can feed it dead flies spring through fall. Don't use flies that have been exposed to insecticide because it will damage the plant.

Propagation: Seeds or division. Collect seeds from flowers that have dried and sow the fresh seeds in peat moss (kept moist at all times). Place the pots in a warm window or under fluorescent lights. Seeds germinate in about 2-4 weeks. To divide, separate new rosettes that form around the parent plant.